Showing posts from February, 2013
Show all

Chennai bloggers club meet is always special.The thought of meeting all the fun filled, like minded,blogger friends makes me to skip even the important meetings,and other commitments so that i could have my presence in the crowd with zeal and zest.After the Veeks and Thomas meet This time the Meet was organized in "Zha" cafe or "ழ" cafe for the CBC books exchange mela.


Well  when i first herd the name i thought it was "jha" cafe. And was not expecting it to be anything great or different from the usual cafe, where one thinks anything can happen over a cup of coffee.

It looks quite normal from the road and one will have to check the cafe board twice to confirm if its a coffee shop, as it is a heritage home that has been converted to a cafe. But once you step in ,the huge aiyanar statue welcomes you with a sword in one hand and a shield in the other.The first tamizh cafe in chennai may be.It has a strong cultural presence.


As you enter this ca…
14 comments
Continue reading...

Every time I go to a musical concert(classical) i wonder how this beautiful art-form was formed.
How were so many Ragas formed of just the seven basic notes?? And what are SA RI GA MA PA DA NI ??? and how were they formed???
I got all these questions answered by my grandmother who explained me how everything was formed. So here is the piece of information that i am sharing here.

During Pralaya,the great deluge,the Vedas flowed out of Brahma's mouth and fell into the sea.Brahma panicked.How could he create without the Vedas?? He went to lord Vishnu seeking for help. So,Vishnu took the form of fish(Matsya avatar,the first avatar of lord Vishnu  because he had to dive into the ocean to find the Vedas.
After the Vedas were retrieved Brahma began working on creation again.The Vedas were four in number,RIG,YAJUR ,SAMA ,ATHARVANA. Out of these SAMA Veda was and is still being sung.The story of music all began with the Sama veda. But it was totally differ…
5 comments
Continue reading...

No matter how much you love heels, everyone needs a great pair of flats now and then.I’m so excited about how these  Ballerina Flats turned out. This was one of those DIY’s that just came together, as I was making them. The rich deep blue is just dreamy!. Do not throw away your old flats, let your creativity flow in and make them shine like new ones.

In case you want to make it more decorative make a bow from satin ribbon and hot glue  it to your ballerinas..!
STEP1: 1.Take your old ballerina and paint it in your desirable color.(I choose blue). Make sure you cover the sole of the shoe with paper. You can also spray paint it.


2.let this dry for a day completely before you add in a satin bow or even make it a peep colored ballerina.
3.To make peep colored shoes follow the step 1 and 2 and paint the toe are in a contrast color.
4.Here i made it simple with just adding polka d…
3 comments
Continue reading... 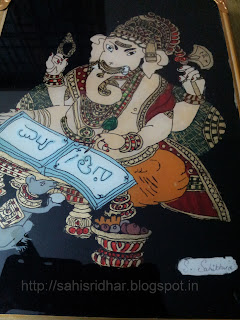 Arts and crafts has always been one of my favorite hobbies, and when you do it all by yourself it gives you such a pleasure. :) Doing your own stuffs from scrap,or torn cloths or even waste materials turns out to be such beautiful items that you can proudly display in your living room or your balcony or literally anywhere..:)
2013 has started with a crafty note for me!! So i thought,you not put up a post on all these simple DIY items that can be used as give away or even as personalized gifts..:).
My first post here in DIY series is the simple glass painting.
This may seem tough but i must say its really easy and worth making it.:)
Things needed:
1.glass paint 2.Tracing sheet 3.A picture of your choice 4.varnish.
How to do?
1. Take the transparent glass  (size-your wish) and make sure it is clean.(as i used the glass that was in my loft not used for years,i had to clean it)
2.With the help of the tracing sheet,trace a picture of your choice and keep it ready.
3.Now, keep the tracin…
14 comments
Continue reading...
More posts